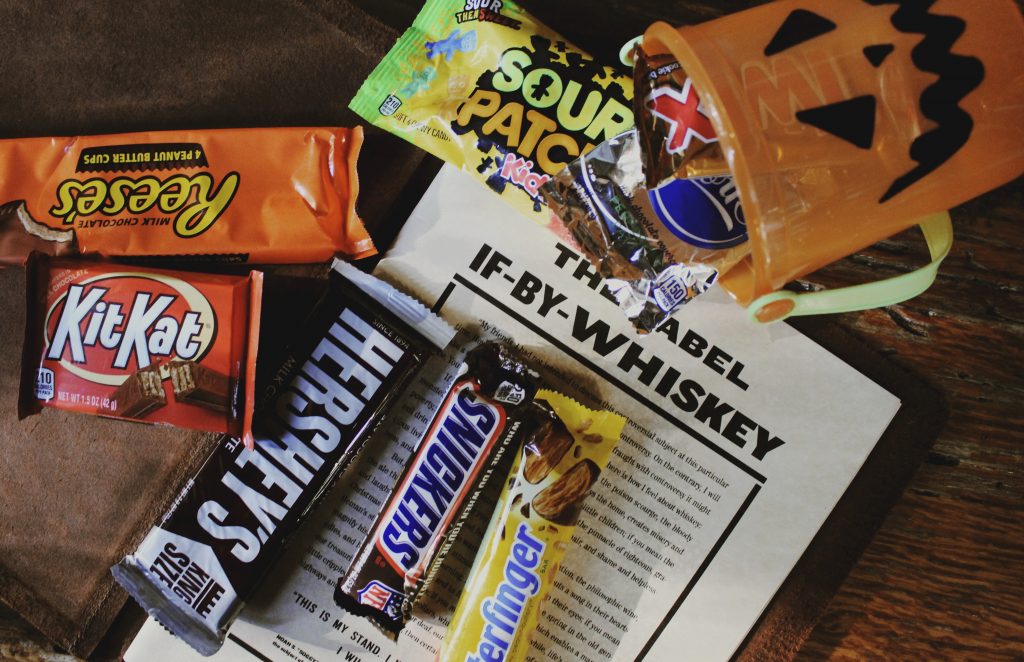 If anything can make Halloween candy any better…it’s bourbon. Local Three is celebrated one of the best whiskey bars in Atlanta and in the nation, so it’s only fitting that our very own in-house whiskey expert — Chef and Partner Chris Hall — pairs up the perfect combos to satisfy any sweet tooth.

Snickers is made with peanuts, caramel, nougat, and chocolate. It’s crunchy, sweet and salty. McKenna is one of my favorite value whiskeys. It features vanilla, rye spice, burnt brown sugar notes, and finishes with a little caramel. Its flavor profile is that of a traditional bourbon with a great deal of balance. I find it a touch on the sweeter side, but the 100-proof gives you a great mouthfeel that compliments the Snickers caramel nougat as it coats your mouth.

Candy: Reese’s Peanut Butter Cup – (This is the greatest candy ever made, fight me.)
Whiskey: Old Forester 1920

Old Forester 1920 is a high-proof whiskey. It’s big and bold and delivers pronounced notes of chocolate. Those flavors obviously compliment the Reese’s chocolate cup shell. There is a nuttiness to the Old Forester 1920 that comes from the barrel char. It almost gives the drink a crème Brulee type mouthfeel and that works really well with this nutty, chocolatey treat. Pretty much anything is good with a Reese’s Peanut Butter Cup, but this is an exceptional pairing. I bet you can’t have just one of either…..

The reason these two work so well is because this small batch has a distinct vanilla note to it with a little hint of caramel. These flavors lend themselves well to the vanilla buttery cookie in the heart of the Twix. In addition to the initial vanilla on the palate from the Elijah Craig whiskey, you also get a hint of cinnamon at the end that works really well with Twix.

A classic candy bar meets a classic bourbon. Buffalo Trace is on the sweeter side with notes of caramel, honey and vanilla, but put that up against the crunchy wafer in the Kit Kat and you get a delicious blend. Buffalo Trace is a lower-proof bourbon which makes for pretty easy sipping. Kit Kat is a great candy bar, but more mellow in flavor and not as bold as others, so these pair nicely.

The thought behind this pairing was inspired by the yeast strain used in the Four Roses Single Barrel. Yeast strains are used to create unique and rich flavor characteristics. The strain for the Four Roses Single Barrel is “OBSV” which yields highly rich and fruity flavors. Every time I drink this bourbon, I think chocolate and cherries. I love the cherry note that pairs with the milk chocolate here.

With this treat, you get lots of buttery peanut flavor. To me, Blanton’s has toffee and caramel notes which play to the center of the Butterfinger, as opposed to the chocolatey outside. Blanton’s is sweet when it starts out on the palate, but the finish gives you notes of toasted nuts and oak which pair well with this sweet treat.

The obvious tart notes from the whiskey sour are a no-brainer pairing for this candy. If you decide to go with an Old Fashioned, I suggest you use plenty of orange and it will work well with the fruity and sour nature of the Sour Patch Kids.

The obvious pairing here might be a mint julep, but it really doesn’t work for me as the julep is far too sweet with the peppermint patty. Because this is such a big candy with a big flavor, you want that big potent pop of rye flavor to compliment it. A York Peppermint Patty has peppermint and vanilla on the nose, but on the palate, you get more of the chocolate. The spiciness of WhistlePig’s rye and the mint from the candy work well together which make this pairing another one of my favorites.

The inedible candy meets the undrinkable beverage…everyone should be ashamed.